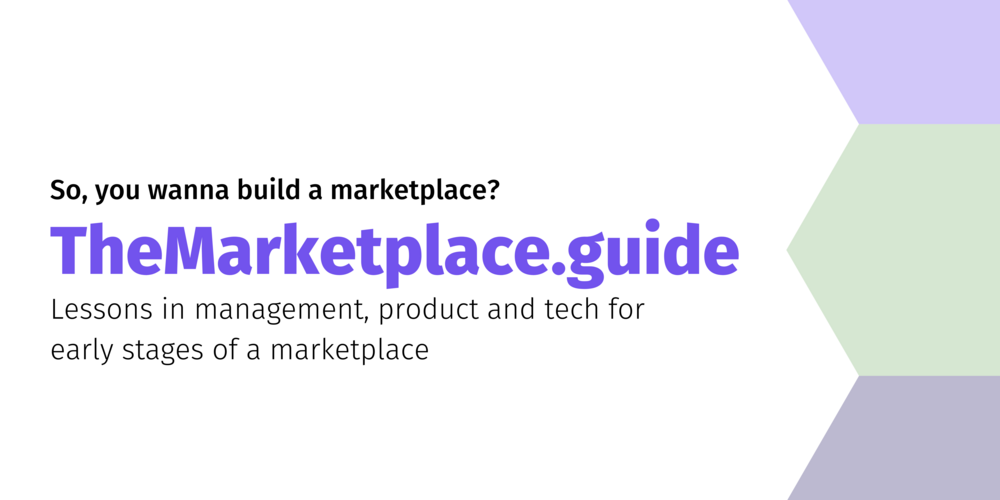 The unbundling is still going on. Even though there are already many marketplaces, there are plenty of niches for new ones to slot in and improve existing industries. Building a marketplace startup is still very lucrative.

But they’re more complex to build

The most significant increases in complexity are:

The early stages are the same regardless of niche, however

New marketplaces often go through the same teething problems that others before them have gone through.

About a year into building Supplybunny, I realized that other founders were facing issues that we had already gone through. They often came to us for advice because we were effectively them a year in the future.

This guidebook is a collection of lessons for the early stages

So, I started taking notes about what we did and what others asked us.

The result is this guidebook presented as a list of things to do.

Some I wish I had known before starting, while others became relevant a year or two later.

A lot of them seem obvious now, but we had to discover them ourselves. It would have been more productive to spend this time on the actual complexity of running the marketplace within our niche.

Since I am the technical co-founder, the lessons are somewhat biased towards others in a technical role. But that doesn’t make them irrelevant for business co-founders.

I hope reading this helps you build a better product quicker.

The objective of this guidebook is to be a shortcut.

The lessons here are less than obvious at the start, but you would have eventually learned all of them yourself.

I aim to inform you about those lessons in advance. That way, you won’t have to waste time learning about things that aren’t core to your business.

Instead, you can better focus on learning where you can provide value in your niche.

But not a tutorial

This guidebook does not cover the work needed to build a startup in general. It’s not comparable to books such as Lean Startup.

It assumes that while you might be a first-time marketplace founder, you aren’t entirely new to working at or running a startup. For example:

Sometimes the e-commerce platform is called the front end and the marketplace is the back end.

That sentence makes you chuckle or cringe.

This guidebook also doesn’t contain detailed implementation tutorials. It does contain examples of how we did it.

Get started by checking out a chapter that interests you the most. The links below go to the index page that contains all the lessons and one-sentence descriptions.

This chapter covers the more general lessons about running the marketplace and focuses slightly more on the CEO than the CTO. It covers things like hiring, building processes, and organizing development

This chapter covers lessons on how to improve your product and the value you provide. It’s useful for the CEO and CTO.

This chapter covers lessons learned in code or architecture. It is most useful for the CTO.

The lessons in each chapter are put in order by the stage at which they become relevant. The first lessons for each chapter are most effective if you know them before you begin, followed by ones to do near the start, and so on.

The cheatsheet has the TL;DR for each lesson

It has the lesson and a one-sentence description.

You can get a bit more information by reading only the headings in each lesson.

And the body contains more details and real-world examples from my experience.

The further reading page has resources I’ve found useful. I also link to them from the relevant lessons.

If you’re interested in contributing, take a look at the Contributing page. It has a few different ways to do that.

My name is Ognjen, but you can call me Oggy. I co-founded Supplybunny, a B2B marketplace connecting food ingredient suppliers to HORECA businesses. I worked in startups before, but this was the first time that I was a co-founder. Supplybunny now processes 7 figures in orders. I think we did several things right, at least in the early stages. And the things we did incorrectly we learned from, and they’re here too.

I write other things on on ognjen.io where you can also find out more about me. You can contact me via email at me@ognjen.io